Thanks to your votes and support, I won the Best Dance/Electronica Song in the Independent Music Awards (IMA’s). The judge selection was completed last month, which I was not selected for. But the popular vote was just announced today and I did win that (which means more to me!). 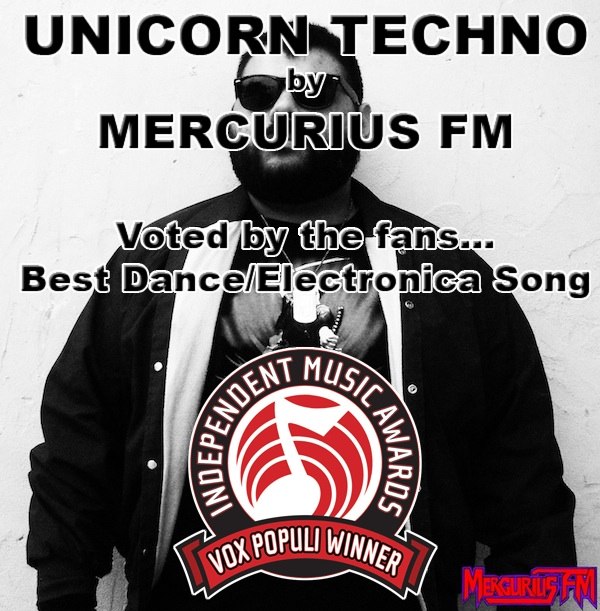 Read the full press release below…

Music Fans From Around The World Pick Fan Favorites In The 12 IMA Vox Pop Poll
August 6, 2013

The Independent Music Awards (The IMAs) and its parent Music Resource Group (MRG)
today announced the results of The IMAs Vox Pop poll, the fan-determined portion of the prestigious international program for independent bands and releases.

Music fans from around the world voted online for their favorite self-released and independent label artists culled from the 400 IMA Nominees announced in April. Phoenix based Mercurius FM is among the diverse group of artists named as this year’s fan favorites. This follows his award for Best Remixer 2012 by Phoenix New Times and a win at the 2012 Toronto Independent Music Awards. Mercurius FM has also been featured on Rolling Stone Magazine for his Sexual Healing remix which ranked #1 on HypeM.com. If that’s not enough, his tracks have been played by top DJs including Dave Clarke, Felix Da Housecat, MSTRKRFT, One Man Party (ex-Soulwax), Acid Jack & others.

The diverse mix of established artists & rising stars named as 12th IMA Vox pop winners hail from 14 countries on 4 continents.
“The IMAs roster of Winners and Nominees are a microcosm of the global independent music scene,” said Martin Folkman, Executive Director of The Independent Music Awards.

“The program’s international diversity highlights the fact that exceptional music doesn’t need a passport or major label publicity machine to win fans: just access and a level playing field. Artists earning top honors in this year’s program include self-released and fan-funded projects, as well as indie label and former major label acts. No matter what their country of origin or style of music, IMA artists are united in their pursuit of artistic excellence and originality,” Folkman said.

Included in the list of IMA fan favorites named today is music veteran Willie Nile whose fan-funded album yielded two Vox Pop Wins (Social Action Song and Rock/Hard Rock Album). The Alt. Country band, The Wiyos also earned top honors with their fan-funded project Twist (Concept Album) a musical collage loosely based on The Wizard of Oz.  Austin rocker Ben Kweller (Rock/Hard Rock Song winner) has been impressing fans & industry for more than a decade. Kweller has toured with music icons, inspired a cult following and earned a top 40 hit in the UK before turning 20. With a smokey brand of indie-pop, Suzanna Choffel, another Austin native, seduced both fans and industry listeners, earning Vox Pop honors for her Folk Singer/Songwriter song “Golden Fires.” Though never formally trained, Emma-Lee from Ontario, Canada has a vocal style that’s been compared to k.d. lang, Norah Jones and Feist. Her debut album, Never Just a Dream, released on Bumstead Records, won best Love Song in The 9th IMAs. Now, Lee’s 2nd album, Backseat Heroine, a winning mix of pop, country, rock and soul, and featuring collaborations with Nicole Atkins, Luke Doucet and Marc Rogers, received a total of 2 wins in The 12th IMA Vox Pop poll (Adult Contemporary Album, Short form Music Video). Though classically trained, the young Hungarian pianist and singer, Rozina Patkai (named Vox Pop Jazz Song winner) found her true voice as a Jazz artist. For the past 3 years she has been thrilling fans with her bossa nova infused compositions, earning honors at numerous competitions, Jazz and Fringe festivals throughout Europe. Regarded as as one of the Latin America’s most exciting bands, THEREMYN_4 (Vox Pop Dance/electronica Album winner) delivers a cutting-edge synthesis of musical styles. The band’s 7th release Fiction Beats – a melange of acid house, electro, techno & jazz, downloads of beats, sequences, and experimental textures – has earned the band their first IMA nomination & win. “The Independent Music Awards celebrate artists the world over who follow their own muse and the true music fans who support them,” said Folkman. “The Vox Pop award is one of the many ways The IMAs motivates fans to discover and support an incredible roster of talent that can get lost among the noise. All IMA honorees receive marketing and sales support. Vox Pop Winners have the added satisfaction of inspiring fans to act on their behalf.”

Nominated work and bios are available at: www.TheIndependentMusicAwards.com

ARTISTRY HAS ITS AWARDS

Submissions for the 13th edition of The Independent Music Awards are open at: www.TheIndependentMusicAwards.com/submit

Listen to the track that won, Unicorn Techno, below…

You can download my award winning track and the whole EP it’s from for free here.

This site uses Akismet to reduce spam. Learn how your comment data is processed.

Check out my new online store! If you have any problems or questions email me mercuriusfm@gmail.com. Dismiss